You are here: Home / Engage / Blog / Our Foray into…(gasp!) Television

The corporate world has long been our bread and butter, for twenty-two years and counting. We confess, we love helping companies tell their stories. However, when given the opportunity to write a television series, well, we couldn’t say “yes” quickly enough.

It was the right project, with the right people, at the right time. The talented team at Crazy Legs Productions brought us in to create an all-vegan show for the Cooking Channel. The program, devoted to helping people live longer and healthier, is aptly titled How to Live to 100. The pilot premiered in January of 2013 and received rave reviews. So much so that four more episodes are headed your way in January of 2014. After that, who knows?

The show is half sitcom, half cooking show, with spoonfuls of amazing tips and recipes offered up in each episode.

While the pilot (nor the unaired episodes, of course) is not available online, you can see a segment of it here. This is Jason – a true wise and wild spirit – taking you through one of his killa recipes.

Look for more episodes in early 2014, and don’t think we’ve betrayed Corporate America for Hollywood. Not yet anyway. 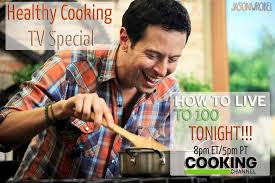 Want to join the discussion?
Feel free to contribute!

© Copyright - 7 Course Communications. All rights reserved.
 We Do Our Best Work in the Restroom…